Hello, friend! We’re our introducing our pets today. Grab your favorite drink (and maybe your pet to cuddle too)!

1. Tell us about your furry writing buddy/buddies!

I have two cats! We have the old lady baby October, who is a tortoiseshell cat. She is possibly the softest cat in the universe and I love her. When she sits with me, she likes to make biscuits and it is sometimes painful :’) But I endure because she is the sweetest baby. She likes to rip up paper with her teeth and sleep in the corner of my pillows on my bed and she is truly the best at cuddling.
There’s also Oscar, a big baby boy, who is… some sort of large tabby cat. Both of them were strays who adopted our family and forced their way into our home. Oscar was just a BABY when he came to us and he could literally fit in one hand at the beginning, but now he’s 18lbs and I use my whole upper body to lift him ToT He has ridiculous back leg strength and jumping power. He’s constantly jumping over my head when I’m lying on the sofa so he can look at the window. He likes to play with straws and will stare at your drink until you give him the straw in it.

I have a Jindo puppy/queen of the house named Mabel (after one of my favorite Gravity Falls characters). She’s about a year and a half, and I feel like she’s more cat than dog most of the time! She loves to curl up in a little cinnamon roll shape to sleep, she arches her back like a cat if you pet her, and she tends to be hiding under the bed to take naps most of the day.

I have a dog! His name is Leo (Leonardo when he’s in trouble), but I think he responds to anything said in a certain tone of voice, even if it’s not his name. Especially when you throw in words like “cute” or “pretty”—that’s him! You’ve gotta be talking about him! He loves long rides in the car and daily trips to the park, so if you happen to see any tears in his eyes, just know that someone has left the house without him and he is devastated.

2. Do they help or hinder your writing process?

October sometimes comes to sit with me while I write, especially if I’m at my computer desk. If I’m on my laptop, she likes to come stand on the keyboard to type the letter q. If I’m reading in bed, she likes to rub her face on the cover of my book so that I will pet her instead. Sometimes, if I am not petting her, she will bite my hand until I do. So. Not entirely distracting, but not really helpful either. But, like I said, she is the coziest cat in the universe, so that is a nice comfort.
Oscar, when he wants to be a nuisance, is a million times more annoying than October. October is small disturbances for a limited amount of time. Oscar is a very large, annoying thing that I can’t ignore and deal with while also handling my writing or reading. When we have meetings or calls, Oscar likes to jump on the back of my chair. He is too large to fit on it. So he kind of clings there with his claws before he inevitably jumps off onto my bed. He also likes picking fights with October, which… I then have to break up.
But overall, they aren’t too bad. I love them and having them around, and. Let’s be real, they probably remind me to get up and stretch when Oscar knocks my books off my bed or howls for food, or October leaps off my lap and then I’m sad because she left.

It depends on her mood! Sometimes she’ll curl up at my feet while I write and just sleep. Other times, she chooses chaos. If she wants attention, she’ll come over and nudge my hand or try to close my laptop. Or, she’ll hit my keyboard with a paw or put my wrist in her mouth when she’s feeling particularly dramatic. If I don’t give her attention immediately, she’ll start knocking over my stuff. Once she made direct eye contact with me as she used her paw to smack my sewing basket over. Then smiled as I had to clean it up! Luckily, she’s cute so I have to forgive her.

Leo is a very big help! I can get a little random while I write. Sometimes, it’s 3am, the night before a deadline, and the only words I seem to know are gibberish. Leo has three main responses to my sleep deprived, nonsensical noises: the “You good?” head tilt; the “Pet me; you’ll feel better” tail wag; and the long, exasperated sigh. That last one is very grounding. There’s nothing like being called dramatic by the guy who literally cries if he hears the car keys jingle and no one invites him to go too. Hearing that sigh, I think, Okay, maybe my writing isn’t that bad.

This is October in a Pumpkin! My younger sister took this photo. 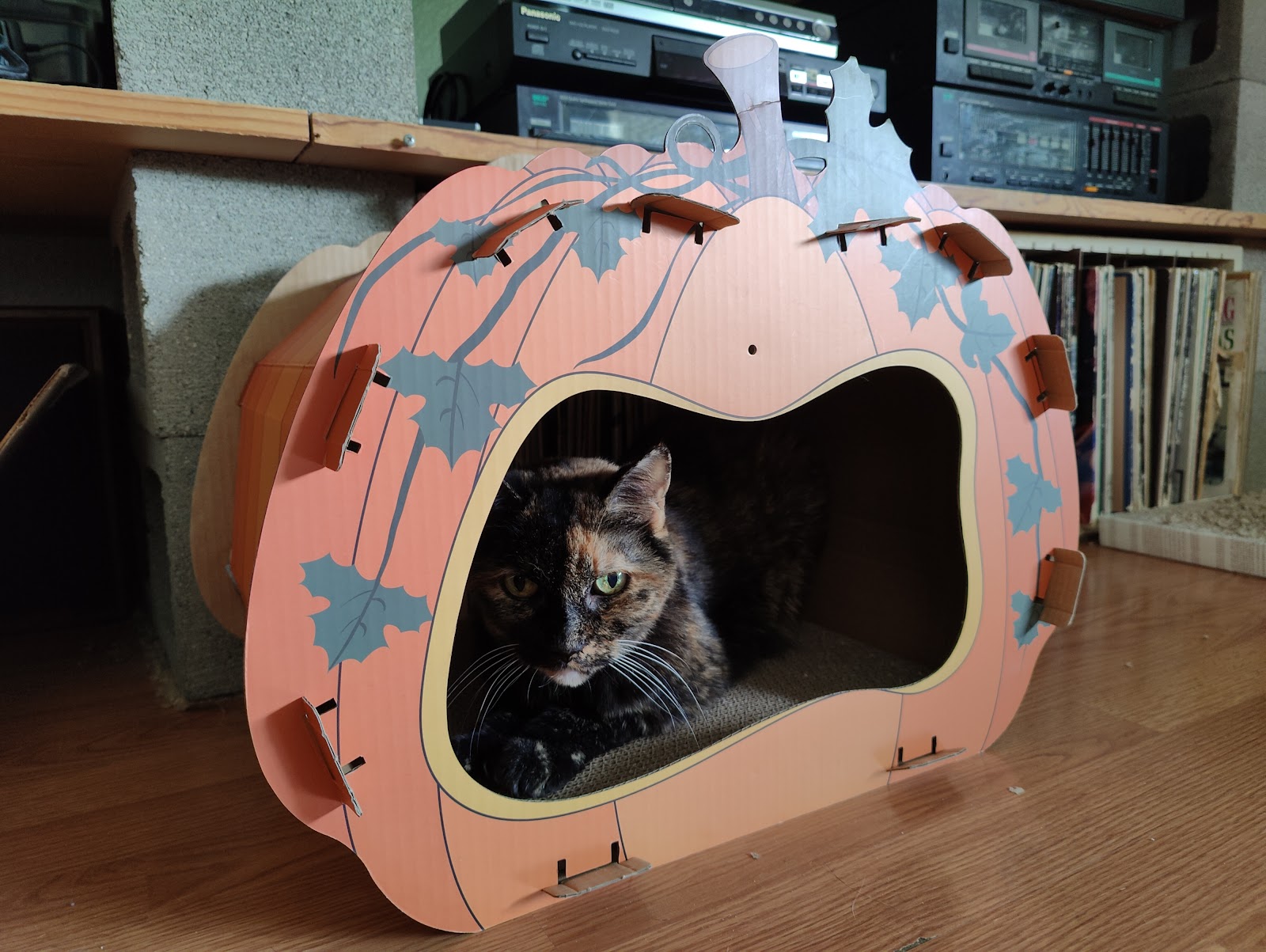 And here’s Oscar with a blanket of tissue paper on. My older sister took this one. 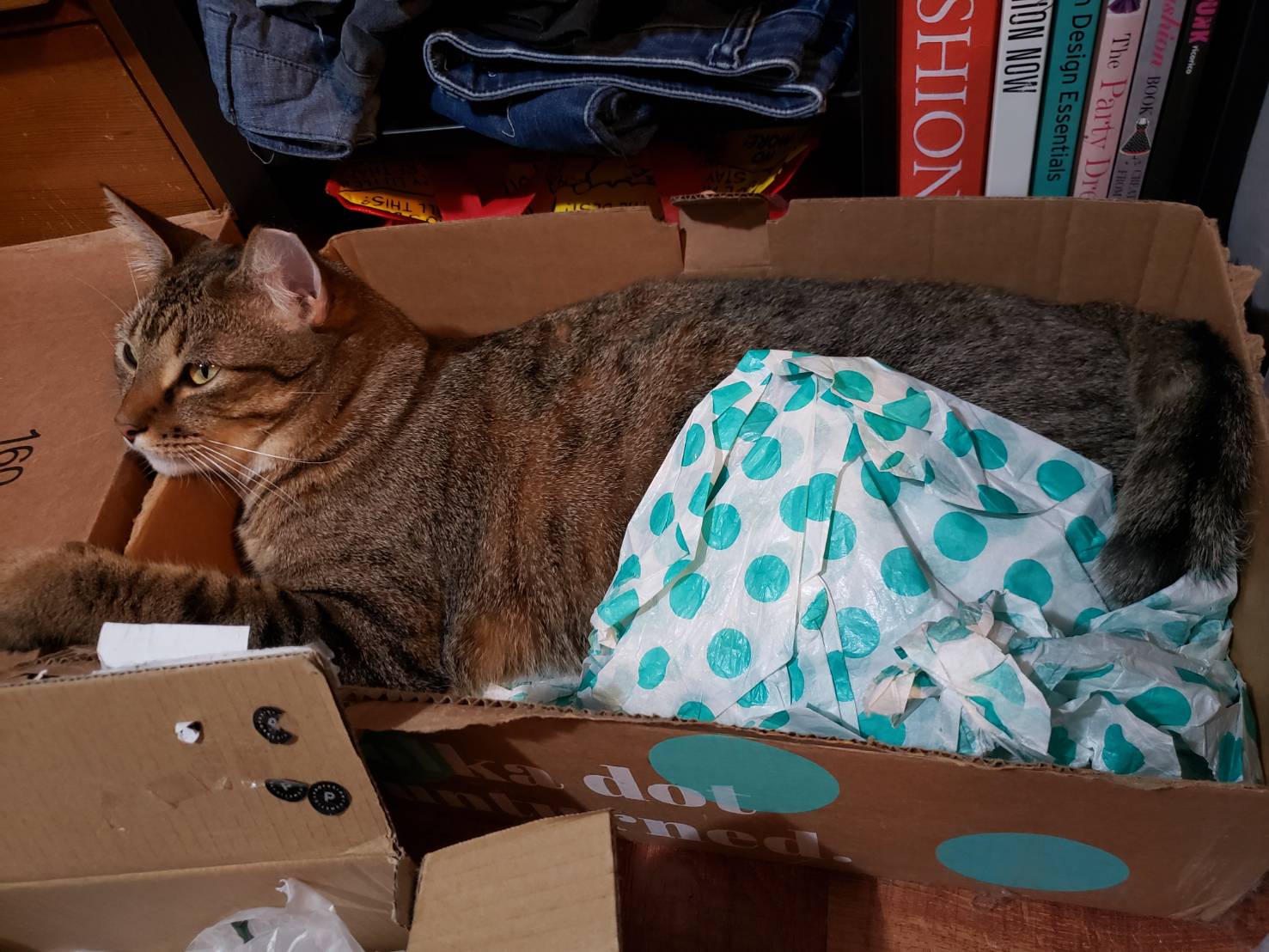 Here’s Mabel curled up like the most precious cinnamon roll.

This is Leo wearing his turtleneck sweater and living his best life—in the car, of course— while my aunt takes a picture.

We’re so glad you could join us!

We’d love for you to tell us about your pets, too! Leave us a comment or find us on Twitter @JaamWriting!